SpecFaction NSW is pleased to announce exciting news for this year’s Aurealis Awards gala ceremony, Saturday 18 May 2013 at The Independent Theatre in North Sydney.

Scott Westerfeld has kindly agreed to be our Master of Ceremonies. Scott is the author of eighteen novels, including several very popular YA series such as Leviathan, Uglies and Midnighters. We are very excited to have him with us this year.

In addition, this year the ceremony will include a special screening of a short film by well-known artist Nick Stathopoulos and director Ryan Cauchi, "It Grows". A work inspired by love of the creature feature genre and featuring miniatures and puppetry made with Nick's superb artistry and design work, the 7-minute live-action film took Nick and Ryan over a year to make. Don’t miss it!

On a sadder note, we are sorry to say that 2013 will be the last year of running the Aurealis Awards for SpecFaction NSW. Our connection with the Awards will conclude with the ceremony in May. This may be the last time the event is held in Sydney for some years, so please join us for one last gala night at The Independent!

Congratulations to all the finalists! Everyone, come and see the winners announced at the ceremony on Saturday 18 May.

I did it! I ran the City to Surf! In one hour 40 minutes, which is about the time I expected. Actually I hoped to do it in about one hour 30, but a toilet stop, drink stations and negotiating the crowd added another 10 minutes or so. Apart from that, I ran the entire distance, including all the way up Heartbreak Hill, which wasn't quite as formidable as I feared; it's not especially steep, just very looonnngg.

It's very pleasing to succeed in this little goal I set for myself at the beginning of the year, to go from barely being able to run a kilometre to running this famous 14km event.

And now: rest. And beer!

I just ran 10.3km! First time I've cracked the 10km mark. Took me one hour and nine minutes, which is pretty slow, but good enough for me. I'm starting to believe I will actually manage to run the City to Surf this year.

For those who wondered what I got up to over the June long weekend - and be honest, you did wonder, didn't you? - I was in the Blue Mountains near Black Springs for the annual 17th century Winter Camp. A true test of one's winter clothing! It was several degrees below zero on Friday and Saturday nights, though Sunday was a little less cold. No snow, alas. We marched around with pikes, did some archery and musketry, ate a lot of good food.... oh, and drank plenty of ale and mead and vodka.

It being so cold, I'm glad I made a new woollen overcoat (called a delia) for my Polish kit, as did Andy Brew; the fox fur collar was nice and cosy. 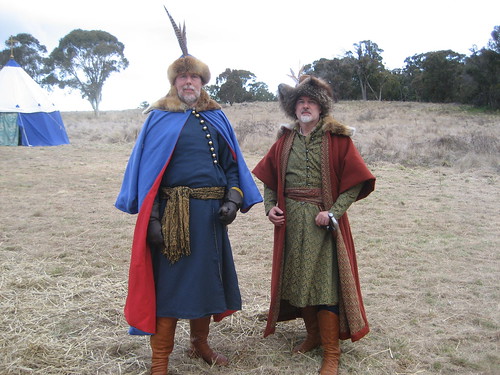 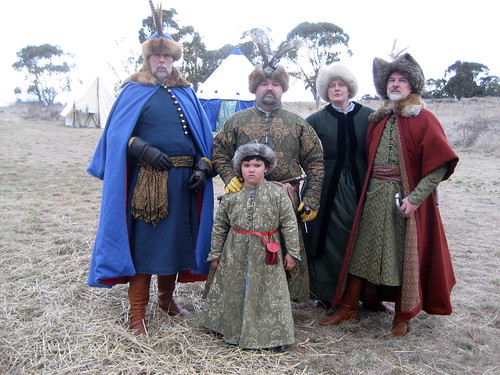 Only Ever Always by Penni Russon (Allen & Unwin)

"The Past is a Bridge Best Left Burnt" by Paul Haines (The Last Days of Kali Yuga, Brimstone Press)

NO SHORTLIST OR WINNING NOVEL

“Fruit of the Pipal Tree” by Thoraiya Dyer (After the Rain, FableCroft Publishing)

A big thank you to everyone who came to the Aurealis Awards last night. It was a great success and I am pleased and proud to have helped organise the event. Congratulations again to all finalists and winners!

There are still final administration jobs to do, and bill-paying, and then perhaps a brief pause before planning next year's event. That said, the ball is already rolling for the 2012 AAs - judges are being selected, funding ideas are percolating.... watch this space, dear readers!

Only four days to go before this year's Aurealis Awards ceremony! It's this Saturday 12 May at the Independent Theatre in North Sydney. Doors open 7.30pm for an 8.00 start. Don't miss out!
Tickets are $35 and can be bought here. There'll be a party afterwards too at a nearby venue.

If you've already booked, thank you! If not, please come along; we'd love to have your company and your support of the Awards. Please feel free to spread the word far and wide.

I went for a run this morning, got home again, showered and changed and headed out for a massage - a run and massage is becoming a Sunday morning thing for me - and immediately realised I'd locked my keys inside the flat. So I was locked out. Isn't it great how you always realise these things the moment AFTER it's too late to fix it? Bugger. Bugger. Bugger!

Luckily I had my phone and called a locksmith, who arrived within an hour and unlocked the door with little fuss. $140 callout fee. Sigh. At least I still had my massage.

8km, 51m04s, 9.4km/h. Late dusk to darkness. Overall a smooth run. Feet got a bit sore after several km; apart from that, and needing to take a dump, I felt like I could have managed another 1 or 2 km.
Collapse